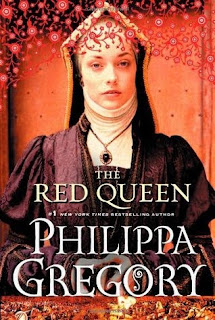 I've been trying to read Gregory's historical novels in chronological order (not necessarily publication order), but when I saw her latest on the new release shelf at the library, I couldn't help myself. The Red Queen is the story of Margaret Beaufort, a descendant of Edward III, and in line for the throne. She is born in the 1400s, in the midst of the War of the Roses, which pit the Lancasters against the Yorks. Since she was a young child, Margaret considered herself extremely devout, and idolized Joan of Arc. She longs to be a nun, but is instead married off to better the family. From her first vows, she focuses her energy on proving her superiority to others, and ensuring that she has a son and protects him until he becomes the King of England. Like many of Gregory's novels, this one is filled with treasonous plots, and calculating strategy to figure out who will win which battles and which side to align with to avoid the Tower and eventual execution. Margaret's character is absolutely infuriating. She is incredibly self-absorbed and selfish and sees things in black-and-white, with no understanding of politics - except those that seem to benefit her. I felt this novel was more simply written than some of the others I've read by Gregory - as if she's sucuumbed to her popularity and is now just pumping out books as quickly as possible without as much attention to their literary quality.

Posted by annehawk at 4:42 PM No comments:

I reaped the ultimate benefit of the kindle when I was able to download the latest Grisham novel the day it came out - from my lounge chair beside a pool in Bali. Fans of Grisham know that he is no supporter of capital punishment. In 2006, he published his first non-fiction book, The Innocent Man, the story of two men wrongly convicted of murder. They both sat on Oklahoma's death row for 11 years before they were exonerated by DNA evidence and released in 1999. The Confession is fiction, but deals with many of the same issues. Donte Drumm, a local black high school football celebrity, is tried for raping and murdering a white cheerleader. He is convicted and sent to Texas's death row, despite the fact that no body was ever found. Days before his scheduled execution, Travis Boyette confesses to the crime. Drumm's lawyers race to the courthouse, to the governor, and to the media, with last minute pleas for Drumm's life. Throughout the story, Grisham explores the various ways in which an innocent man could possibly be convicted of such a heinous crime. There is an eyewitness who seeks to recant his testimony, there is racial tension, there is prosecutorial misconduct in the form of a relationship with the trial judge, and of course, there is a coerced confession. As Grisham lays out the erroneous evidence piece by piece, his explanations almost seem as if he is writing a treatise against the death penalty. There were more than a few occasions where I felt like he had used this fictionalized account as a platform for lambasting the entire capital system - and he did so with a lot of telling, and not always a lot of showing. That being said, Grisham's portrayal of the deterioration, mentally and physically, of Drumm is chilling in its realism, and the reaction of the public and the courts to the 11th hour appeals is all too real. There were times when Grisham's anger with the process hit a little too close to home and I found it difficult to continue reading. The fear, of course, is that people unfamiliar with the system will read this novel and assume that Grisham has exaggerated and created a lovely story that is divorced from reality. But, to the extent people actually realize that these improprieties are occuring, not just once in awhile, but on a regular basis in police interrogation rooms and courtrooms across the nation, I applaud Grisham for his courage in sounding the alarm.
Posted by annehawk at 6:08 PM No comments:

When you pick up a typical Oprah Book Club pick (and by "typical" I mean not when she's trying to get people to buy the classics), you know you're in for an emotionally heart-wrenching ride. You also know that just when you think things can't get any worse for the downtrodden main character, it definitely will. While Jewel is not filled with the physical and sexual abuse common in many of Oprah's picks, it is the story of an abandoned and unloved woman trying to find meaning in her life. Jewel, already a mother of five, finds herself pregnant again in her late 30s. Thrilled at the prospect of yet another baby, she finds that this time around, she will be challenged more than at any other time in her life. Her new baby requires all her time and attention - and she does everything she can for the child - to the detriment, it seems, of her marriage and her other children. Throughout the book, she expects everyone else to put their lives on hold for her daughter, and becomes resentful when this doesn't happen. I wasn't exactly sure what message the author was trying to send, as Jewel never seems to come to any realization as to what she has lost in her blind sacrifice for her youngest child. While I didn't expect much more from this book than a good, easy to read story (which I basically got), I did find myself consistently annoyed by Jewel's selfishness in her selflessness. I expected more from the ending, and felt unfulfilled when I finally got there. Good for a rainy afternoon by the fire, but not much more.
Posted by annehawk at 5:28 PM 1 comment:

There are still seven good reading weeks left before the end of the year, but I'm going to go out on a limb and say this is my favorite read of 2010. This book has been sitting on my shelf since my brother bought it for me for Christmas at least two years ago - and it just kills me that such a gem could be waiting around right in front of my face and I had no idea. But, I am so happy to have found it. This is a strange mystery about a collection of objects all pertaining to alchemy, and collected hundreds of years ago, only to be stolen, sold-off, or otherwise lost to history. Fasman gives some historical background of the objects and then intersperses tales throughout the book of each individual piece, it's use, value, and known whereabouts. The rest of the book takes place in present day where a reclusive college professor has just died, seemingly under mysterious circumstances. Paul Tomm, a young cub reporter for a small Connecticut newspaper is assigned to write an obituary. But, instead of the usual straightforward story, he finds himself on a wild goose-chase to figure out who this professor really was and why anyone would want him dead. Given the alchemy angle, there's definitely a little mumbo-jumbo thrown into the mix, but mostly it was just good old-fashioned suspense. Paul does find himself in a little romance that is incredibly suspicious, and he behaves a bit too naively at times. But, all in all, I thought this was an incredibly well-written and fun mystery. One of those books that got me excited about reading all over again.
Posted by annehawk at 5:10 PM No comments:

This is my favorite Alexander McCall Smith's series. As I've mentioned before, my favorite character from 44 Scotland Street is 6-year old Bertie who just wants to be a normal little boy, while his mother Irene is convinced that he must be cultivated through classes in music, yoga, and Italian. As Smith explains in his preface, I am apparently not the only one enamored with Bertie, and this installment focuses even more on him. He also points out that while the other characters grow and move from relationship to relationship, visit foreign countries, have babies (in the case of Bertie's mother), and generally grow old, Bertie has stayed the same age. It is, after all, the biggest part of his charm. In addition to Bertie, this book focuses on Matthew's never-ending quest for love in his strawberry crushed denim, and Angus Lordie's attempt to vindicate Cyril who has been taken away by the authorities after being accused of biting someone. As usual, light and entertaining, and leaving me excited for the next one.

Posted by annehawk at 1:41 PM No comments:

This is one of those books that seems to be published to a bunch of advanced hype - the library queue must have been up to 150 people before the library even had one copy of it on the shelves. Even after reading the description of the book, I had no idea what it was about. But while on vacation, I was despite to download more books to my kindle, and my friend Courtney - an avid reader - suggested it. So, I took a leap. A couple chapters in, all I could think was, "What the heck is this book about?" There was a story about a 6-year old girl abandoned at a convent by her prostitute mother. Another story about an explorer or researcher of some sort who lost his team to an unknown disease in some faraway jungle. And then there is definitely some kind of unauthorized military experiment being done on death row inmates. What follows is some sort of crazy cross between Cormac McCarthy's The Road, and a zombie-vampire thriller. But, despite my inability to explain what it's all about, the story holds together failry well and includes some very likeable characters, including Amy, a strange little girl with inexplicable powers (some of which I don't think were ever fully explained). It's an end-of-days horror story with personality. Definitely worthy of the hype.
Posted by annehawk at 1:29 PM No comments: