The Books of William Steig

I love when people introduce me to new authors.  I love it even more when those people are my own kids.  Four afternoons a week, the kids in his preschool class heading off to kindergarten next year (including him), get together for what they call "Literacy Group."  In Literacy Group, a teacher reads books to them while they draw or paint, and have discussions about what they're reading.

On Mondays, they have tea-time during Literacy Group.  The kids in the group all happen to be boys, and while I know it shouldn't matter, I do get a kick out of just seeing these crazy active boys all sitting around a table together, enjoying a book and each other's company in such a civilized fashion (the teachers take photographs so we can better visualize this experience).

While the group has moved on to Steig's chapter book, Dominic, they started off the school year exploring the picture books of William Steig.  Steig was a prolific children's book author, so it's crazy to me that I don't recall ever reading any of his books.  Of course, the one that we are all familiar with (though may not have realized was a book) is Shrek.  Every day for a couple weeks, Ben came home and told me about a new book - he really seemed engaged by everything.  He would ask me if I had read something, and when I said, "No," he'd emphatically tell me to "look it up!"  He retold me the stories and asked me questions I wasn't quite sure of the answers to - given that I hadn't read any of the books!  So, I decided I better go to the library and check out a stack.  Here's a sampling of the ones I brought home and we read together: 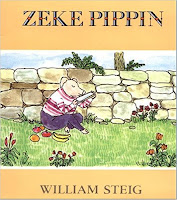 Zeke Pippin - this story about a pig who finds a magic harmonica (after it falls off the back of a garbage truck) is Ben's favorite of the bunch.  I laughed when Zeke brought the harmonica home and cleaned it with his toothbrush and his father's Schnapps.  After he believes his family is not adequately appreciating his talents, he heads out into the world on a musical adventure. 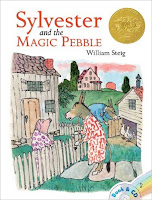 Sylvester and the Magic Pebble - this is my favorite of the Steig books we have read together.  Sylvester is a donkey who happens upon a red pebble.  When he touches it, he discovers he is granted his every wish.  An ill-advised wish, however, leaves him in the lurch.  As a kid (and as an adult), I often thought about what my three wishes would be (can I wish for more wishes?), so this story really spoke to me - and is a cautionary tale about what happens when you want for too much, and forget to be grateful for what you already have. 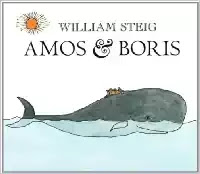 Amos and Boris - features a small mouse who befriends a blue whale.  This continued for us an on-going conversation we've been having about the differences between mammals and amphibians/reptiles.  It also includes a tidal wave which is one of Ben's favorite natural disasters.

Brave Irene - a dressmaker's daughter braves the elements to get a gown to a duchess in time.  She faces numerous dangers along the way.  Ben was not as keen on this book which he considered "a little scary."  But despite this, he excitedly told me about all the bad things Irene had to overcome.

Toby, What are You? - in this silly book, Toby acts things out and asks his parents to guess what he is.  Great inspiration for a game of charades. 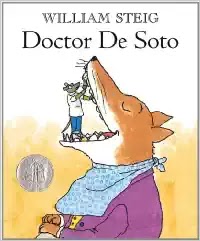 Doctor De Soto - a mouse dentist is tested when a fox shows up with a toothache.  This book actually made me realize that I have read Steig before.  I first borrowed this book about three years ago when Ben was approaching his first dental appointment and I was looking for books to ease the strangeness of the visit.

Which Would You Rather Be? - asks the questions we've all wanted to know the answers to: would you rather be thunder or lightening?  A stick or a stone?  An interactive book that gets kids talking, and also inspired Literacy Group to learn one of Ben's now favorite songs:  El Condor Pasa by Simon & Garfunkel - and consequently inspired us to listen and learn more songs by S&G and Paul Simon.  I mean, what kid wouldn't love to sing The 59th Street Bridge Song?

There are over thirty more Steig children's books to choose from, so I anticipate that our interest in him will span the year.  Ben gets a kick out of reminding me that, "you don't really know these books, right Mom?  You know because I told you, right?"  My daughters are also quite curious and have taken to "stealing" our Steig library books and hiding them in their room so they can read what the big kids are reading.  I can't wait to see what else Literacy Group introduces us to throughout the year!
Posted by annehawk at 3:26 PM No comments: 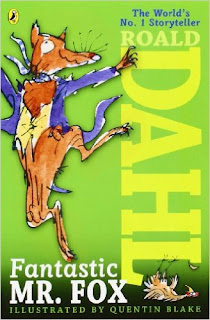 While I do allow my children to pick out the books they want to read, every once in awhile, I still like to force some on them.  After a summer of chapter books about superheroes and Geronimo Stilton, I took back control, and foisted another Roald Dahl pick on Ben.  This time, the choice was Fantastic Mr. Fox.  I read this book back in elementary school, and vividly remember a description of one of the farmer's in the book having ear wax so bad that dead bugs were stuck in it.  I think of it every time I clean my ears!

The plot of this book is very straight-forward - simple for a four-year-old to understand and follow.  Mr. Fox has kept his family fed by stealing food every day from three rich local farmers.  When they wise-up to his shenanigans, they make a plan of their own to smoke Mr. Fox out of his hole and shoot him.  The chase is on, and the question is whether Mr. Fox can outsmart the greedy men, or whether he will meet his end.

As with a few other Dahl books, there is a moral dilemma here - does Mr. Fox have the right to steal food that isn't his?  Shouldn't he be punished?  But, without stealing, his family will presumably go hungry - and don't these farmers already have too much?  But, aside from the bigger picture, there is a lot of fun to be had with the descriptions and characters in this book.  It's short, so it took us about three nights to read, but throughout each reading, we would stop and talk about what we thought would happen next, whether we thought Mr. Fox would be able to escape, and what he was going to do if he did.

All in all, this was a very fun book to read out loud.  As with other Dahl books, there is some name-calling that I may have censored a bit, but for the most part, we told the story as-is.  Made me excited to move on soon to The B.F.G. and The Witches!
Posted by annehawk at 3:11 PM No comments: