Ben's most recent chapter book find features a mouse named Ricky Ricotta and his Might Robot!  Each book features alien villains of some sort from another planet.  Ricky must save Earth from the villains with the help of his Mighty Robot.  The nine books in the series each feature creatures from a different planet -very appealing to many preschoolers who love space, planets, robots, and fighting!

One day Ben brought one of these books to school and his Teacher Jill read it to him and his friends.  Since then, Ben - who is otherwise a bit shy with his teachers - has wanted to bring other books in the series from school to read with this teacher.  It has been a really nice way for the two of them to connect and a starting point for some conversations between the two of them that I think will help grow their relationship and Ben's trust in this teacher.  It's been a fun connection to watch, and I'm always happy when Ben gets excited about a new series.


We have a few requested from the library coming in soon - and I hope we can find the rest of the series before we move on to the next one!
Posted by annehawk at 10:44 AM No comments: 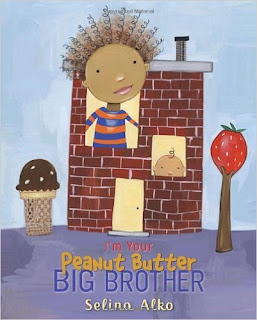 I've been trying to be more conscientious lately about choosing books for my children that both feature children of color, and that explicitly discuss issues of race.  I found this book, I'm Your Peanut Butter Big Brother, on the We Need Diverse Books website.  It features a little boy who is eagerly anticipating the arrival of his little brother or sister.  While he describes his own skin color as like peanut butter, he wonders what his new sibling will look like, and how s/he will be a mix of their father and mother.  Many of the descriptions of the possible different skin tones are described in terms of different kinds of foods - ones that small children will be familiar with.  I did run across a comment online (that I can't find at the moment) that took offense at using these type of descriptors.  I'm not sure what is "right" or "wrong" in describing skin tones, but I think the book is a good depiction of why we all have certain features - how we sometimes look like like our parents, but sometimes we might not at all if they are very different looking from each other.  It also sparked a discussion about why siblings who come from the same two biological parents might looks very different from each other.  My children enjoyed the illustrations, and thought it was really funny at the end when the big brother and younger sibling were depicted as ice cream cones.  It didn't cause any deep revelations to occur, but I think it did get them thinking about different skin tones and the recognition that people look different from each other for many reasons, none of them bad.
Posted by annehawk at 12:20 PM No comments: