Alice & Clara's Pick of the Week: Let's Play in the Forest 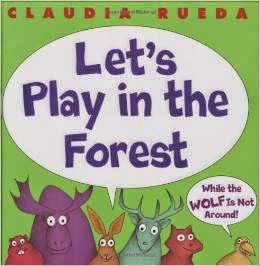 In an effort to encourage more outdoor play lately, I've been interested in books for the kids set outdoors or specifically in the forest.  I randomly came across this one at the library the other day. The illustrations are colorful and contain cute little animals, which I thought my girls would love.  And they did.

Alice's Pick of the Week - Glasses for D.W. 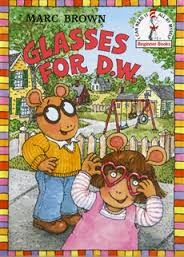 I have no idea sometimes what draws my children to certain books, but for the past couple weeks, Alice has been inseparable from Glasses for D.W.  The book features the characters from the cartoon, Arthur, which my children have never seen.

The basic story is that Arthur wears glasses.  His younger sister, D.W. wishes that she could also - and she comes up with all the reasons why she can't quite see right.  Arthur tries to explain to her why she doesn't need them, but she won't listen.  He comes up with a miraculous cure for her eyesight, but in the end, she still wishes she could have glasses.

This is a really cute story of a little sister looking up to her brother, and as someone who started wearing glasses at age six, I appreciate the effort to normalize glasses or even try to make them seem cool.  While I was never teased for wearing glasses (other than being called Four Eyes a couple times, which I found too unoriginal to actually qualify as teasing), they could be a pain and make one different enough from other kids to be an occasional source of self-doubt.  As with any kind of difference, it's nice to think that once in awhile, the thing you dislike is actually a source of envy for others.

I thought Alice's love of this book might be a gateway to all the other Arthur books, of which there are upwards of forty.  But, I borrowed another one from the library the other day and she wasn't interested.  I may need to find the ones where D.W. features more prominently.  Or, if could be that Alice just likes glasses.  Whatever the reason, this one is definitely a current favorite!
Posted by annehawk at 2:16 PM No comments:

People I Should Have Learned About When I Was a Kid: Maya Lin 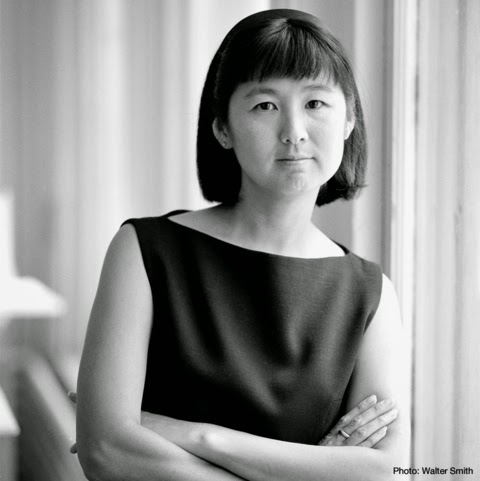 The Artist of the Month at my kids' pre-school is Maya Lin.  I am embarrassed to say that until I read in their newsletter that they were studying her, I had no idea who Maya Lin was.  Having since read up a bunch on her, I find my ignorance appalling - I'm not sure if it's a function of the fact that many schools do not teach modern artists (unless you take specific art classes which I never did), or if this is simply another example of minority artists not receiving the recognition in the canon that they deserve.

For those who don't know (and my hope is that I am the one in the minority here), Maya Lin is a Chinese-American architect, sculptor, and landscape artist.  When she was only twenty-one years old, she won the public design contest for the Vietnam Veterans Memorial in Washington, D.C.  I remember traveling to D.C. as a high-school student and being brought to tears by the sight and overwhelming significance of the monument.  It is, to me, such a powerful embodiment of those who lost their lives in service to our country.  I wish I had known more at the time about the person who designed it. 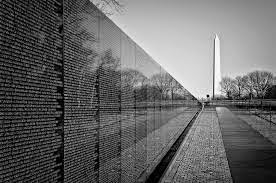 Following the Vietnam Veterans Memorial, Lin designed the Civil Rights Memorial in Montgomery, Alabama, and was on the selection jury of the World Trade Center Site Memorial Competition.  In 2009, she was awarded the National Medal of Arts by President Obama.  More of her work can be seen on her website. 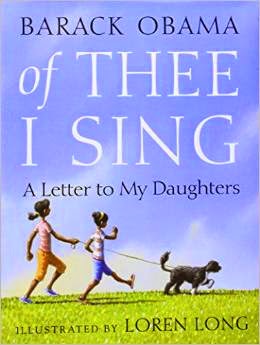 Once I learned more about Ms. Lin, I went in search of resources to share with the kids.  I could not find any children's books solely about her, but did discover that a book I should have read a long time ago but haven't, President Obama's Of Thee I Sing, features a chapter about her (and 12 other inspiring Americans).  In addition to reading this book to the kids, we also did our standard coloring sheets while we discussed her work - and I tried to impress on my kids just how amazing it was that she achieved so much at such a young age, and in the face of significant prejudice against her because of her Asian heritage.

I also found this Maya Lin inspired art project online.  It is a little ambitious for us, given the ages of my kids, but it did inspire me to just have the kids break out the play-dough and start creating.

I'm definitely late to the party when it comes to learning about and appreciating the brilliance of this incredible woman, but truly better late than never. 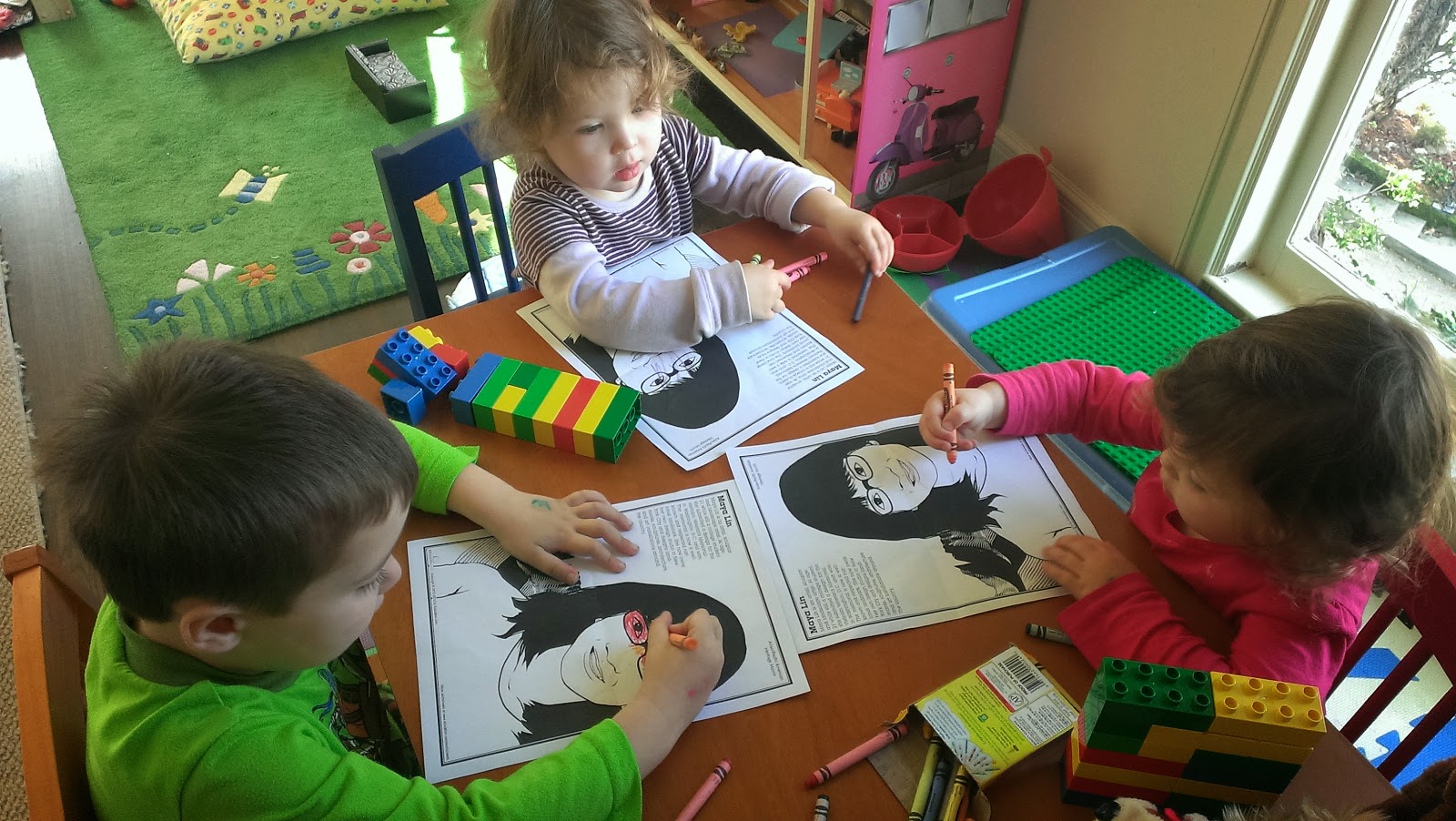 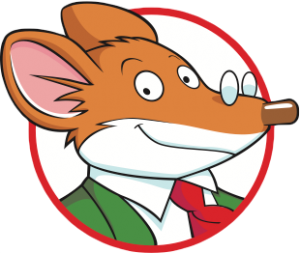 Ben has recently been sucked into the strange mouse world of Geronimo Stilton.  I had never heard of this series before Ben discovered it at our local library, but it was started in 2000 by the Italian writer Edizioni Piemme, and has been published in English since 2004.

Geronimo is a mouse who lives on Mouse Island where he works as the editor of the Rodent Gazette, the island's most famous newspaper.  Along with his sister Thea, his nuisance of a cousin Trap, and his adorable nephew Benjamin, Geronimo finds himself traveling the world solving mysteries and always hot on the heels of his next big story.

Geronimo himself is an unlikely hero.  He prefers the quiet life and is quite frankly scared of most everything.  He faints at the thought of danger, has debilitating motion sickness, and isn't very inspiring.  He can tell a good mouse tale, but his reluctance to involve himself in the nitty-gritty is not all that exciting.  I suppose he is a good hero in the "we can all do our part" kind of way, and he teaches us to face our fears and that in a world of superheroes, you can still save the day even if you're scared to do it.  That being said, I find Geronimo a bit exhausting.  There are, however, upwards of 60 (!!) books in the Geronimo Stilton series, so I don't see my adventures with him ending anytime soon. 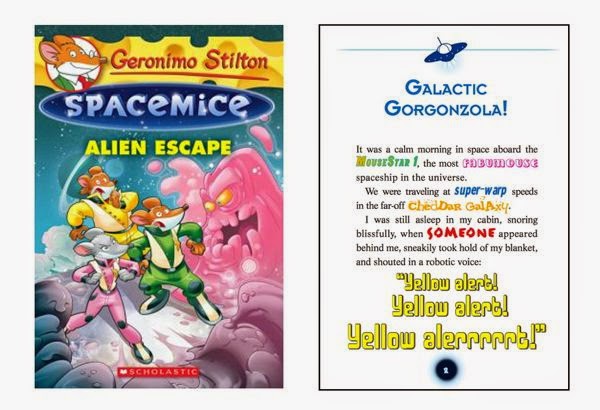 One of the really fun things about these books is the way the text is written.  This is lost on Ben who can't read by himself yet, but it does add to his visual interest in the books.  Many of the words on each page are written in different colors and fonts to add emphasis to the action.  I think this is something I would have found really engaging about the book as a young reader. 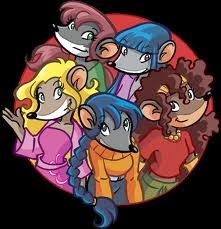 Then...Ben stumbled upon something else...a spin-off of the series that focuses on Geronimo's thrill-seeking independent sister, Thea - and five young female mice who call themselves the Thea Sisters.  These ladies might know everything there is to know about shopping and fashion, but more importantly, they are fearless.  They can travel anywhere, fix anything, and in general kick some series mouse butt!

Without expressing why, Ben has started gravitating toward the Thea Sisters books instead of the ones starring Geronimo.  The other night when we were reading about the girls' travels in Peru, he commented, "they don't faint like Geronimo, right?"  It was clear that he thinks they are pretty cool.  While I am not completely sold on a series about mice, I love that these female characters are written so boldly.  Of course they like to wear cute shoes and have their hair done right, but they can also be brave.  I appreciate that Ben is drawn to these characters, even if he can't quite articulate why.  Luckily, there are 20+ books in the Thea Sisters series for us to explore.

As with any popular book series, there is also a Geronimo animated series.  We have only seen a couple episodes, but already noticed that the TV Geronimo is a lot braver than his literary counterpart.

Ben is so enamored with Geronimo Stilton; he can't imagine that the rest of world isn't similarly taken.  The other day in the car we heard the song "Geronimo" by Sheppard.  Ben excitedly asked whether the song was about Geronimo Stilton.  I tried to tell him about the great Apache warrior Geronimo.  It didn't phase him.  He still thinks the world wants to rock out to a song about a mouse.
Posted by annehawk at 11:30 AM No comments: