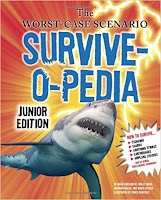 My six-year-old son (like a lot of people) has a fascination with natural disasters.  I'd think this was strange, but my older brother and his 10-year-old daughter share the same interest, and I grew up watching shows like Stormchasers and Extreme Weather, never quite understanding it all.  But, clearly they are not the only ones because there are all kinds of books for kids on disasters.  A couple months ago my son had an absolute blast reading a book called The Surviv-o-pedia.  It is, as the title suggests, an encyclopedia of dangerous situations that people have survived - from shark attacks to quicksand to natural disasters.  It's filled with crazy stories and factoids, and he loved telling me about all the situations I'd probably rather not hear about!  After he finished this, we went on a search for other similar books - we found a few in the non-fiction section, but then stumbled upon an interesting fiction series called I Survived!

There are about 18 books in the series - each tells a fiction story about a boy who survived a real-life disaster.  I thought this might satisfy Ben's disaster curiosity, while also teaching him a little history.  He has enjoyed some more than others - his favorite so far is I Survived the Eruption of Mount St. Helens, 1980  and I Survived the Destruction of Pompeii.  It has been fun to hear him talk about the stories with so much excitement and a little bit of fear.  I hope he won't become a stormchaser, but I don't mind him reading about these things in the comfort of our own living room!
Posted by annehawk at 10:48 AM No comments: