The Color of Water - James McBride

My childhood friend, Sarah, loaned this book to me.  She is a teacher and a mother of three young children.  Attempting to balance all that life has to offer is a frequent topic of conversation when we get together.  This book tells the story of Ruth McBride, a Polish Jew born in 1921 who made her way to New York and at the age of 17 married a black minster and raised twelve children.  Needless to say, the woman is an inspiration when it comes to finding balance.  Once married, and essentially shunned by her family, Ms. McBride refused to acknowledge that she was white, choosing instead to pass as light-skinned.  She faced racism and poverty, but pushed for her children's education - and they all graduated from college, many going on to grad school.  She spoke rarely about her past, and this book is her son James's attempt to uncover more about his mother's life.  This is an interesting portrayal of the importance of race - Ms. McBride chose not to focus on it - to instead look at a person's character and contributions.  But, it's clear from the narrative that her mixed-race son faced difficulties growing up with respect to his racial identity.  Because his mother was unwilling (or unable) to discuss race, I felt like she did her son a disservice.  While so much of who we are is self-perception, when it comes to race, so much can be shaped by how others categorize and define us.  Without an open environment to discuss these difficult issues, my fear is that this is where anger, misunderstanding, and ultimately racism fester.  I think this would be a fantastic book for a book group - particularly one made up of teenagers.

Clara's Pick of the Week: Harold at the North Pole 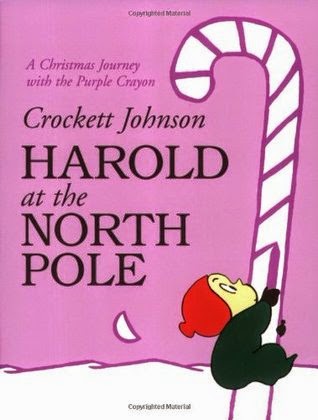 Harold at the North Pole by Crockett Johnson:  Like many children, my kids are fans of Harold and the Purple Crayon.  I didn't realize until recently that there are more books in the series, including this one, which is obviously appropriate given the time of year.  In this adventure, Harold must find a Christmas Tree before Santa gets to his house on Christmas Eve.  Along the way, he encounters Santa and helps him load up his sleigh with gifts for children all around the world.  Given Clara's fascination with Rudolph, she particularly loves the pages where Harold draws the reindeer to guide the sleigh.  This morning, Clara insisted on bringing the book with her to school to share with all her friends.  Hopefully she will let go of it long enough for her teacher to actually read it to the class.
Posted by annehawk at 1:59 PM No comments: 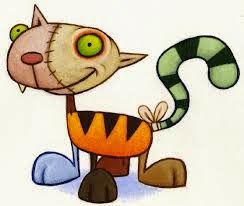 Frankenstein's Cat by Curtis Jobling: Ben suggested this book to me after he read it at school - we couldn't find it at the library, so I ordered it on-line and unfortunately it didn't arrive until after Halloween - but fortunately, the kids don't seem to care and it is has been in the daily rotation for the past couple weeks.  Frankenstein's Cat is kind of a sad little tale about a cat put together by Dr. Frankenstein, before he made the monster.  The cat is made, in part, from a smelly alley cat, which makes the cat smell.  As a result no one wants to be his friend, so he asks Dr. Frankenstein to make him a friend - with disastrous results.  The basic gist of the story makes me a little uncomfortable - everyone being mean to the cat because he smells.  But, the illustrations are colorful and the story a bit silly - so the kids seem really drawn to it, and haven't seemed to adopt the idea of teasing each other for smelling or anything like that, so I think I will give this a tentative thumbs-up endorsement.  At least for the Halloween fun, if not for any deeper moral reason.
Posted by annehawk at 2:21 PM No comments:

"Rain rain go away, come again another day.  Little Alice wants to play..."  My girls have been singing this song all week - and though here in Northern California we absolutely do not want the rain to go away, I have enjoyed hearing their songs.  The rain has also been a good opportunity to read some books about rainy weather. 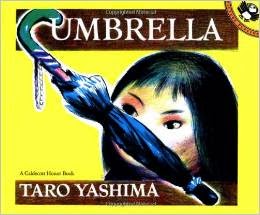 Last night, Ben and I read the beautifully illustrated Umbrella by Taro Yashima.  In Umbrella, three-year-old Momo receives her first umbrella.  She is so eager to use it that she invents reasons to take it out in sunny and windy weather.  But, he mom convinces her to save it for a rainy day.  When that day arrives, Momo is filled with music and happiness.  I enjoyed this blog post about the book which provides some background on the author's life and some of the illustrations from the book.

What Can You Do in the Rain? by Anna Grossnickle Hines
Who Likes Rain? by Wong Herbert Yee
Who Likes the Rain? by Etta Kaner
Come on, Rain! by Karen Hesse
Rain Feet by Angela Johnson